I have now retired from basketry. The end of an era. 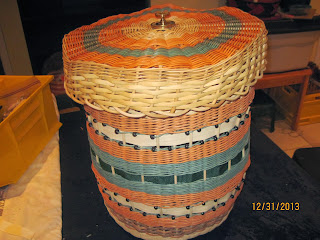 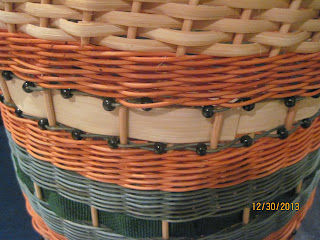 Beads and a wide band of flat cane were one of the design elements, 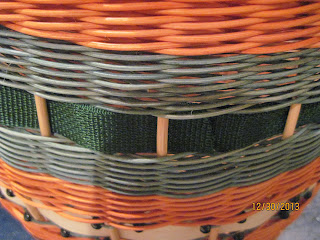 Another design element was the addition of a band of webbibg. 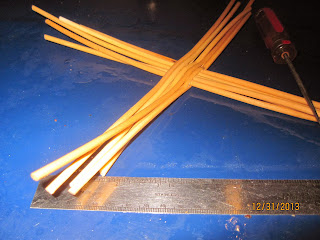 This shows what I did with the ten 10" stakes for the lid. I started by piercing five of the stakes with the bodkin or awl shown above. I then poked the other five stakes through the pierced five to form a cross. 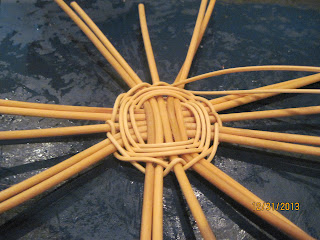 I then wove three rings of round cane around the cross before beginning to separate the stakes, 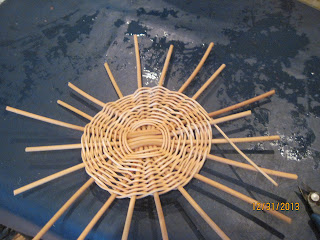 Eventually, all twenty ends of the ten stakes were separated. 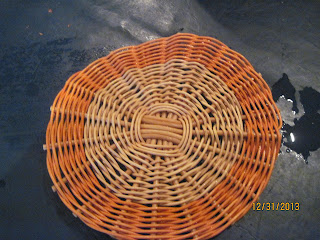 I continued weaving until I reached the end of the stakes. These were all then trimmed off. 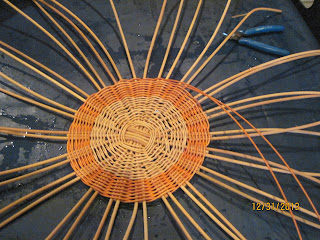 This was when I inserted the 40 14" stakes, one on each side of the 20 beginning stake ends. 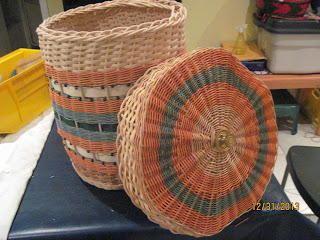 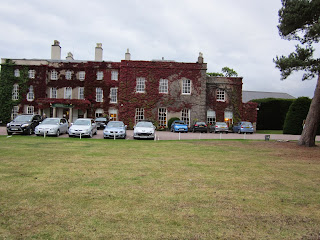 2013 was a great year for holidays. In August we travelled to England and stayed for two weeks at this country manor, called the Wychnor Park Country Club. The home was built in the eighteenth century, and is a resort managed by Diamond Resorts. It is conveniently located within an hour's drive of the city of Stoke-on-Trent where most of our relatives live. Many visited us there.

I managed to get a story about our stay there published in the "Renaissance" magazine, the publication for Ottawa members of the Retired Teachers of Ontario. 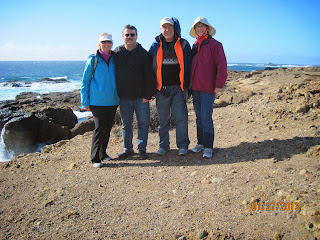 In January we travelled to San Francisco where we met up with neighbours who had moved there from their old home across the street from us. We enjoyed meeting with them again and exploring parts of California. 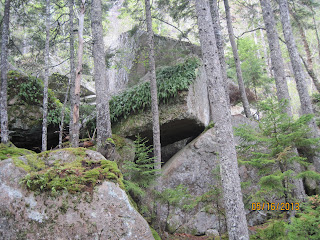 Our third holiday was a two week jaunt to the Acadia National Park in Maine. We took our bicycles with us and explored many sections of the park on the well maintained bike trails, by bike, on foot and by car. 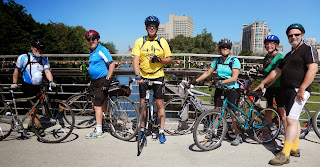 At home in the warmer weather we spent most Wednesday evenings and Saturday mornings in excursions with the Glen Cairn United Church's cycling group, The Wheels of Fortune. The season's rides culminated with the group taking part in a 25 or 50 km "Ride for Refuge" where we raised funds for the Ottawa Mission, a shelter for homeless men. In 2014 the group will once more take part in this Ride, raising fund for the Kanata-Stittsville Refugee Sponsorship Group. I am a member of this seven church sponsorship group on behalf of Glen Cairn United Church.

We have three holidays planned for 2014. In February we head to Myrtle Beach with my golf clubs. In June we return to Maine and the Acadia National Park. In late August and early September we take a cruise on the Rhine River from Amsterdam to Basle. 2014 should also be a great year.

Merry Christmas and a Happy New Year to all the readers of this blog. May your 2013 have been as great as ours, and 2014 be as good as ours promises to be.

Posted by John Toft Basketry at 5:12 PM No comments:

Retirement from basket-making on hold. 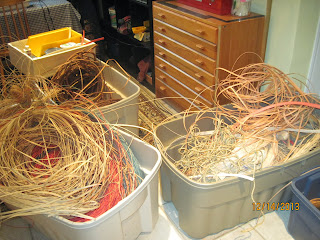 Several months ago I decided to retire from making baskets. While I still enjoy making them, I no longer enjoyed packing the shelving units, loading the baskets into totes tying the totes to the top of the car, driving to a venue, unloading and assembling, and then repeating the process again after the sale had finished. Via Kijiji I attempted to sell the supplies, shelves and other basket-making goods. The sales were somewhat successful in that the shelving units and booth floor coverings were sold. However, I had no offers for the basket-making materials them selves such as those in the totes above.

So, on Monday I fished out these materials and decided to make as many baskets as I could from these left over materials. 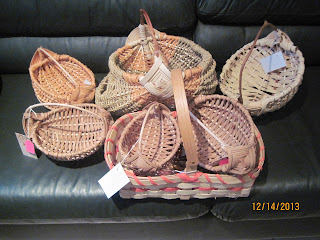 In six days I have been able to make a small dent in these supplies. I managed to make six rib baskets of various sizes as well as one swing-handled market basket. I have promised to take part in a sale on February 2nd at the new Richcraft recreation Centre put on by the local Chinese Seniors. Given the amount of left over material, I will likely have some still left by that date. 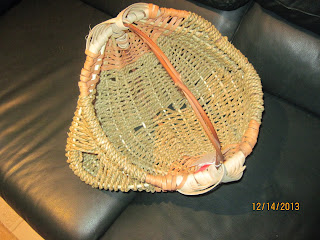 For the Fallen, by Laurence Binyon

With proud thanksgiving, a mother for her children,
England mourns for her dead across the sea.
Flesh of her flesh they were, spirit of her spirit,
Fallen in the cause of the free.

Solemn the drums thrill; Death august and royal
Sings sorrow up into immortal spheres,
There is music in the midst of desolation
And a glory that shines upon our tears.

They went with songs to the battle, they were young,
Straight of limb, true of eye, steady and aglow.
They were staunch to the end against odds uncounted;
They fell with their faces to the foe.

They shall not grow old, as we that are left grow old:
Age shall not weary them, nor the years condemn.
At the going down of the sun and in the morning
We will remember them.

They mingle not with their laughing comrades again:
They sit no more at familiar tables of home;
They have no lot in our labour of the day-time;
They sleep beyond England's foam.

But where our desires are and our hopes profound,
Felt as a well-spring that is hidden from sight,
To the innermost heart of their homeland they are known
As the stars are known to the night.

As the stars shall be bright when we are dust,
Moving in marches upon the heavenly plain;
As the stars are starry in the time of our darkness,
To the end, to the end, they remain.

This poem was read during the Remembrance Sunday Service today at our church. It was written just a few weeks after the start of WW1 after over a quarter million casualties  were reported, just a small proportion of those to come.

Posted by John Toft Basketry at 4:39 PM No comments:

Labels: For the Fallen, Laurence Binyon, Remembrance Day ceremonies, We will remember them., WW1 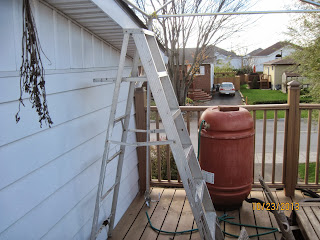 For the first time this fall, the weather forecast contained the words. "wind chill." Snow is not yet forecast for Ottawa, but it is not too far away. So today was the time to do some small preparations for winter. As you can see, the rain barrel has been emptied and turned upside down. The step ladder has been placed in position on the deck so I can climb it and use the snow rake to clean snow off the solar panels. 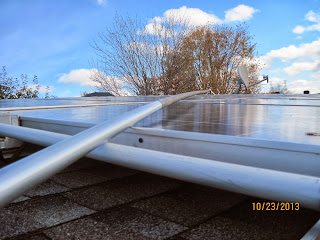 The snow rake is in position. I visited three hardware stores this morning to find "extensions" for the snow rake. Of course, these were found at the third location. The 16 feet length of the snow rake was not enough to reach the full width of the solar panels. I added two five foot extensions to the rake handle. The 26 feet length should be plenty now. There will be no need for me to climb on the roof this season to reach areas previously not accessible from the deck 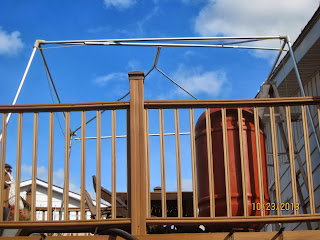 My eldest son, Julian, stopped by to help me remove the canvas covering of the deck's sun canopy. The frame remains in place ready for the re-installation of the canopy in the spring time.

Other winter preparations will include removing dead flowers from the deck and gardens, and replacing the car's summer tires with winter tires. Winter holidays are already booked, so that part is well in hand.
Posted by John Toft Basketry at 2:02 PM 1 comment: 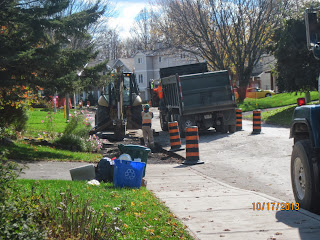 The work crews are getting closer to our house as they excavate the street as a flood mitigation measure. Last year the road outside our house was raised so that flood water would by-pass our street and flow south. That work ended where the concrete sidewalk ends. The new work aims at lowering the section beyond that raised section so that flood waters could pond there and slowly drain away. 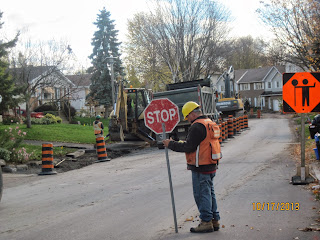 Posted by John Toft Basketry at 4:30 PM No comments:

John Toft Basketry
Born and raised in England. Emmigrated to Canada in 1966.I lived from 1968 to 1998 mostly in Red Lake NW Ontario, where I was a teacher. Middle of three sons is autistic.